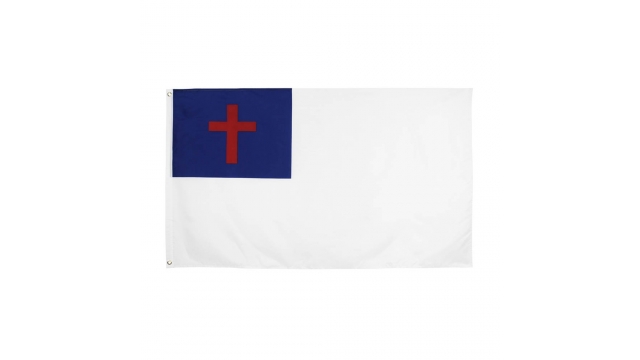 The Christian Flag is an ecumenical flag designed in the early 20th century to represent much of Christianity and Christendom. Since its adoption by the United States Federal Council of Churches in 1942, it has been used by congregations of many Christian traditions.

In consideration of these times with great division among countrymen, there is no better time than now for this movement to occur. The Christian Flag Project is excited to join with like-minded fellow Christians and celebrate this inspiring launch movement together.

Scott Newman, Founder at Christian Flag Project says: “This is to be a very exciting and enthusiastic time with the launch of the Christian Flag Project campaign because it is doing something that is truly memorable and making a significant impact with Christians in America. It should be extremely worthwhile and should raise great awareness about the flag flying mission and those collective voices being heard.

Believers sharing the love of God with neighbors and communities by adding a Christian Flag to their homes by September 26th will show God’s love is relevant in America and beyond. With the launch of the One Million Flag Campaign, our aim is to bring God’s love to the National conversation and lead healing in our Country.

It’s about unity and not division, that one can stand up for and share the beliefs on which this country was founded. What a great way to share the rock on which one stands. It’s time to share flying the Christian flag in communities, homes, businesses and churches. The only way to make that sort of impact will be to commit to flying the flag and sharing with others about the project. This launch celebration is just one of the many ways that Christians, together, with the Christian Flag Project, will achieve that goal.

When we asked about the Christian Flag Project, Scott Newman said: “We think it’s going to gain positive momentum because of the passion of the Christian people. It’s doing what’s right and virally sharing with others! We also know that Americans and Christians are at a point of questioning where we stand as a nation and in the unity of our salvation. This is a way to join together as believers and fly the Christian flags boldly!”

It’s the hope that all Christians would join as believers and unite in the One Mission, One Passion, One Million Christian Flag campaign project by flying them boldly on their homes and businesses. To find out more about this project, please visit ChristianFlagProject.com

END_OF_DOCUMENT_TOKEN_TO_BE_REPLACED

Brussel, Belgium Feb 7, 2023 (Issuewire.com) – Following the closed-door launch event of the whitepaper about the $1 trillion passenger...