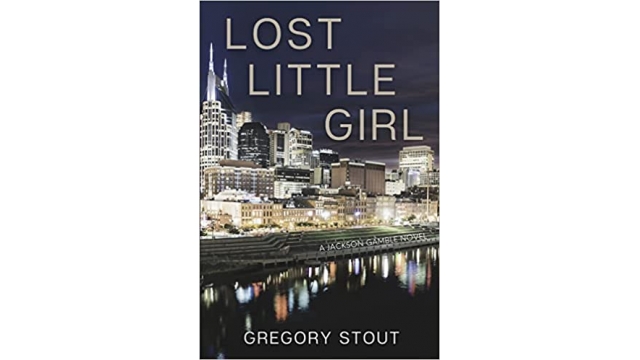 Greg described the book, “The novel is about Nashville PI Jackson Gamble, who takes on a case that seems simple enough. All he has to do is find and return a fourteen-year-old girl who has disappeared from home. Gamble’s experience tells him the girl is just another runaway, but her mother insists she has been kidnapped.”

Greg continued, “The search for Gabrielle sets Gamble on a path that leads him through the city’s underbelly of sex for hire, pornography, snake-handling religious fundamentalists, and perhaps a serial killer of teenaged girls. With the help of an attractive woman with a heartbreaking past of her own, he reaches the conclusion of his investigation, with results that are both tragic and unforgettable, where the smallest mistake could spell the end of both his career and his life.”

Lost Little Girl is Gregory Stout’s debut mystery in the Jackson Gamble series. Greg is also the author of Gideon’s Ghost, a young adult novel that takes place in small-town America in the mid-1960s. Greg has also written 21 books on the history of American railroads. The first title, Route of the Eagles, was released in 1995. Greg Stout recently released the newest young adult novel in July of 2022 Connor’s War and is completing the second Jackson Gamble novel The Gone Man for release in October 2022.

Connor’s War is based in the Vietnam era and about a 15-year-old boy who faces being shipped off the remotest part of the Kansas flat land. “How do you leave all your friends from a sophisticated Fresno area High School and even being a Navy brat, this exile to the flatlands will not have a good outcome,” asks Greg. Greg weaves the story around the fact that Connor, the protagonist, has a father who is a US Navy Commander who is shot down in Vietnam and is missing-in-action, whose fate is unknown, and a young boy whose mother is a US Navy Officer in Nursing is transferred to Japan for her medical expertise. Is Connor safe traveling alone on a passenger train to a small town in Kansas? Connor headed into the unknown to live with an unknown grandfather, who is a circuit court judge.

This novel addresses some common issues that teenagers face such as separation anxiety, death, and young love, problems, which are a common issue amongst military families. Greg said, “I wrote the book because I felt there weren’t enough young adult male books that dealt with real-life controversies.”

Greg Stout is the author of Gideon’s Ghost, a young adult novel set in small-town America in the mid-1960s, and Lost Little Girl, a detective novel set in Nashville, Tennessee. He has also written 22 books on the history of American railroads. The first title, Route of the Eagles, a history of the Missouri Pacific Railroad, was released in 1995. A complete listing of Greg Stout’s published works can be found at gregorystoutauthor.com.